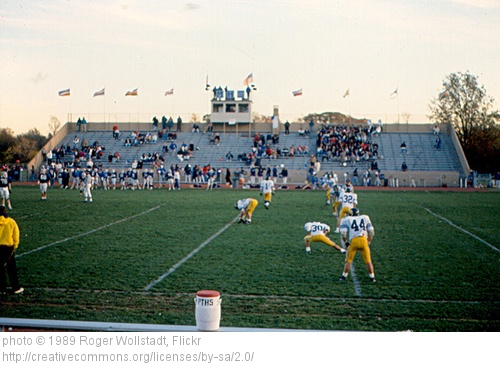 Sometimes you just feel the need to make a statement.

Today, mine is this:
Don’t ever give up.

All of my young life was filled with baseball, football and neighborhood sports.
I realized at an early age that I had a pretty natural ability to throw a football accurately.
So, my goal was always to play quarterback in high school and then in college.

But, when I stepped out onto the practice field for the very first time as a 9th grader, I realized, along with everyone else on the freshman football team, that I had a gift.  I was a good, accurate quarterback.  But, that was not my gift.  I actually knew that I was a gifted punter around the neighborhood, but I did all that I could to hide it.

I should have never kicked the ball before practice that day.

It was uncanny.
That ball flew off of my foot in a way that was almost ridiculous.
Players were telling me to “do it again” each time a new coach made it out to the field.
So, I did.  And, it became evident to all that day that the position of punter was mine to lose.

That was a good year.  We did better than we were supposed too and I enjoyed using my gift to help our team finish much stronger than predicted.

But, it wasn’t until my senior year that I had the experience that would mark me until this very day, twenty three years later.

As I started the year off, a good friend of mine and I were competing for the position of punter.  He also played corner back, so I felt secure that the coaches would look to give him a break and let me kick.  So, we practiced all winter, spring and summer.  Then came the Fall.

I was told the first game that my friend was starting.  That was a shock to me (and I think him too!).  Everyone on the team tried to encourage me, but I just wanted to play and help my team.  I put more time into making sure that I was right on track.

I think we slid into the 3rd game of the season and I still had not played a down.  My uniform was as white as snow.  I decided in my heart that I would give it this one last game and then I would stomp off and quit.  I thought to myself, “if they are not going to play the best players, then I will just quit wasting my time and energy playing for them”.  Well, I was told that game, yet again, that I would not be starting.

This is where my life changed.

I was so mad.  I’m not sure how I didn’t throw my helmet at the coach that day.  I felt so much anger rise up in me that the tears were boiling over in my eyes.  At that moment, I saw my dad standing at the fence watching the warm-ups.  I walked over to try and justify my anger with him and make the statement that I was going to quit right at that moment.  So, I walked over the fence and told my dad, “I’m not going to start again.  I’m going to quit.  This coach is out of his mind.”

My dad no doubt heard the anger and disappointment in my voice.  He calmly looked at me and said, “No, stick with it.  You’ll get your chance.  And, when you do, you must take advantage of it.”  That was enough to help me through that game and another week of practice.

It reminds me now of a great quote from one of the greatest football coaches of all time, Vince Lombardi.  He said, “Once you learn to quit, it becomes a habit.”  So true.

The next game rolled around.  I was punting the ball over 60 yards in the air at the pre-game warm up.  Again, I was told I would not be the starter.  But, this time it was different.  I somehow knew that I would get a shot because of the calm response of my dad.

We were losing this game.  Our team was not moving the football down the field.  I think it was the second or third quarter when the call finally came.  I was at the other end of the sideline when I started hearing everyone calling for “Gills”.  The coach was calling for me to punt on fourth down.  I thought, “OK, so we are backed up on our own 10 yard line, losing, and NOW he wants to put me in?!”  No matter, I ran down to the coach and he looked me straight in the eye with a desperate but passionate plea and said, “Steve, kick the crap out of the ball!!”  Then, he pushed me out on the field.

As I ran into the huddle and started to call the play signal, the guys in the game looked up and started saying, “Alright, Steve, you’re in….let’s go!”  Their uniforms bloodied and covered in dirt.  I felt like Jesus running out there in my bright white uniform.  Anyway, they picked their heads up a little higher as I prepared to take advantage of my opportunity.  We lined up.  The snap came and I launched the ball off of my foot in a perfect spiral about 35 yards down field.  It just so happened that the receiver on the other team let the ball go right through his arms and our team recovered the ball.  We went on to win that game and I went on to punt the rest of the season and throughout the playoffs.

I learned a lot about “never giving up” that season.

Had I given up, I would have lived with regrets for the rest of my life.  I’m pretty sure it would have been easier for me to quit other things along this journey as well.  What my dad told me that day has been a guiding phrase for my life.  And, since that point, I seem to live with a passion to push through the “impossible”.  And, I’m stronger for it.  And, hopefully others will benefit from it.

I have found that so many people have gifts that they never use.  They know the gifts are there, but they think that they have to be doing something else instead.  I thought I was to be a quarterback.  My gift was punting.  I was best for our team when I was punting.

For millions of children, there is no dad on the fence to give guidance.

You are gifted in some way.
And, your gift may be the very thing that sparks your church, your community, your friends to be involved in putting an end to the orphan crisis.  Without your gift, this team assembled to help end the orphan crisis, will never win.  We need you.

As Winston Churchill said in his 1941 speech, “Never give in–never, never, never, never, in nothing great or small, large or petty, never give in except to convictions of honour and good sense. Never yield to force; never yield to the apparently overwhelming might of the enemy.”
What about you?  Are you using your gift to help the team?  Our churches are full of onlookers who are content to sit on their gift and watch others play.  Have you been gifted to write?  How about to speak?  With influence?  Resources?  Connections?  There is something you can do to make a difference for the ones around the world who need us the most, the fatherless.
We need you in the game,
“Coach” Gillis
Founder | Executive Director
www.patchourplanet.org